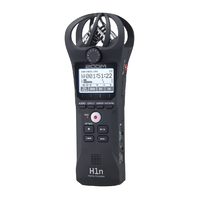 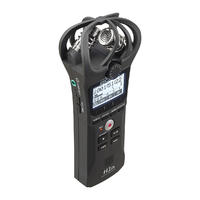 The new H1n is the "next" take-anywhere recorder for every creator’s gear bag. Its X/Y microphones capture high-quality stereo sound, supporting up to 24-bit audio at sampling rates of 44.1, 48, or 96 kHz in WAV and various MP3 formats.

The new H1n is the "next" take-anywhere recorder for every creator’s gear bag. Its X/Y microphones capture high-quality stereo sound, supporting up to 24-bit audio at sampling rates of 44.1, 48, or 96 kHz in WAV and various MP3 formats.

With the H1n, the user experience is redesigned. One-touch button controls make it simple to record songs, audio-for-film, lectures, podcasting, and more. And its new monochromatic 1.25” LCD display is easy to read even in the brightest lighting conditions.

An advanced onboard limiter offers distortion-free signal up to 120 dB SPL, cleanly recording the loudest of bands.

The H1n's Playback Speed Control lets you transcribe music, interviews and other types of recordings without altering pitch. You can also set the H1n to auto-record, pre-record, and self-timer, making sure you always capture the moment. In addition, the new tone generator makes it easy to calibrate your H1n and camera audio levels.

An ⅛" stereo mic/line input lets you record with your external microphones or other sound sources, and supplies plug-in power (2.5 volts). Connect headphones via the ⅛" headphone output with dedicated volume control. You can also use the H1n's built-in speaker to listen to your recordings.

The H1n's USB port provides a digital output of the stereo mix and allows data to be sent to and from your computer. It also allows the H1n to be used as a USB microphone and a microSD card reader.

The H1n is battery-powered and offers up to 10 hours of recording time. Put it in your pocket, toss it in your backpack, or mount it to a camera—the H1n travels wherever you do.

One-touch button controls
1.25” monochrome LCD display
Intuitive menus for easy operation
Stereo X/Y 90˚microphones handle up to 120 dB SPL
Stereo ⅛" Mic/Line In mini phone jack
Stereo ⅛" Phone/Line Output jack with dedicated
volume control
Limiter button for input signal up to 120 dB SPL
Playback Speed Control, Voice Emphasise Filter,
and Stereo Bounce functions
Auto-Record, Pre-Record, and Self-Timer functions
Supports up to 24-bit/96 kHz audio in BWF-compliant
WAV or a variety of MP3 formats
Tone generator for filmmaking use with DSLR
and video cameras
Records directly to SD and SDHC cards up to 32 GB
Micro USB port for data exchange to and from computer
and use as an audio interface
Runs on only 2 standard AAA alkaline, Lithium, or
NiMH rechargeable batteries, or AC adapter (AD-17)
Up to 10 hours of operation with alkaline batteries 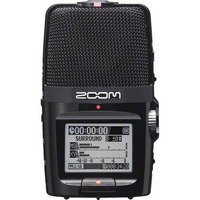