HX Stomp XL is a professional-grade amp and effects processor that delivers HX modelling in a performance-ready pedal with eight capacitive-touch footswitches.

HX Stomp XL is a professional-grade amp and effects processor that delivers HX modelling in a performance-ready pedal with eight capacitive-touch footswitches. The same SHARC DSP chip found in our flagship Helix products enables the HX Stomp XL pedal to run up to eight processing blocks simultaneously, and the assignable footswitches let you access and control those blocks in powerful ways, making it flexible enough for use in nearly any application.

An expanded version of the compact HX Stomp floor processor, the Line 6 HX Stomp XL boasts the same award-winning Helix family pedigree* but ups the ante by providing eight switches, enhanced MIDI capabilities, and an intuitive pedal editing mode. Like the HX Stomp, the HX Stomp XL serves up eight blocks — amps, cabs, and stomps — per preset, and adds a fourth snapshot per preset for even greater sonic flexibility. Use the HX Stomp XL as a standalone rig or as a command center for your MIDI-enabled gear. And take advantage of its ample I/O to accommodate numerous amp configurations, including 4-cable amp setups. Moreover, the HX Stomp XL contains a 6-switch looper for loop-centric performers, and it’s equipped with a 2-channel expansion jack for expression pedals and additional external switches.

*The HX Stomp is powered by a single SHARC ADSP-21469 processor, versus the Helix's two.

Not only does the HX Stomp XL give you 128 presets for real-world gigging applications, but it also comes loaded with heaps of great tones for instant inspiration. Stock presets are organized by instrument (guitar, bass, keys, acoustic) and application (direct to PA, 4-cable amp routing, etc.), which makes it fast and intuitive to dive in and find tones.

Modern ampists rejoice! The HX Stomp XL has integrated support for 4-cable amp integration. This allows you to front load your FX loop-equipped guitar head with stomps traditionally reserved for the front end of an amp (drives, EQs, filters, wahs, and fuzzes), and back-end effects that tend to sound best after an amp's preamp section (delay, reverb, and modulation). Not only that, but several of the HX Stomp XL's presets are also preconfigured for the 4-cable method, which provides a pre-routed template from which to create custom patches.

The HX Stomp XL is much more than a multi-effects amp modeler. Though it can easily replace your current board into the front end of your amplifier, it also boasts enough I/O and control to take the lead in even the most complex guitar setups. Here's what you get:

Following Helix's lead, the HX Stomp XL boasts eight capacitive touch footswitches and a Helix-inspired pedal edit mode makes designing and recalling presets easier than ever. Simply touch the switch you want to adjust, make the necessary changes, and save. It couldn't be simpler. The HX Stomp XL allows four snapshots per preset and seamlessly switches between them to add tasty variations to spice up an arrangement. And to keep track of your tones and changes, Line 6 outfitted each of the switches with bright color-coded LEDs. No matter how dark or bright the stage is, you'll always know what function each footswitch is controlling.

As a standalone rig, the HX Stomp XL astounds. Yet, it can also serve as the command center for complex, MIDI-enabled rigs. The HX Stomp XL boasts no less than 102 customizable controllers via MIDI-CV for foot-tappable control over external pedal stacks, amp channel switching, preset selection, and much more. Additionally, you can sync all of your time-based devices via the onboard tap tempo switch. Integrating a sprawling performance setup is a cinch with the HX Stomp XL.

You can dramatically streamline your recording setup with the Line 6 HX Stomp XL on your studio desk. Dialing in tones is as fast and intuitive as onstage. Meanwhile, USB connectivity and future-looking 24/96 headroom and clarity preserve your recordings for later generations to enjoy.

For picky pedalists, the HX Stomp XL makes a truly board-worthy stompbox. True bypass switching eliminates unwanted coloration between your other stomp effects, so you can integrate the HX Stomp XL's advanced pedal, amp, and cab models into your setup with the quality of your signal intact.

The HX Stomp XL includes support for third-party cab IRs. Now fresh tones and inspiration will always be just a click away.

A proud part of the Helix family

With the entire library of models from the Helix family at your behest, you'll never be at a loss for tone with the HX Stomp XL. All effects and models are processed through the HX audio engine, ensuring every single swell of a modulation effect, overdrive response, or delay decay feels convincingly like the unit it's modeling. 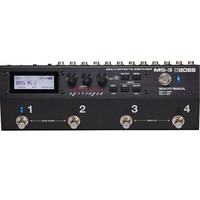